Posted on October 9, 2009 by jonathancuriel 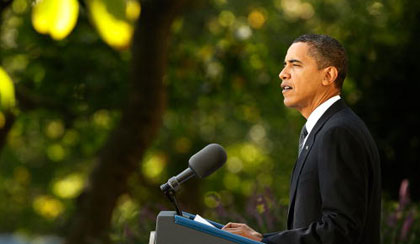 Nice to know that the Republicans’ most vocal pundits have retreated to the position they know best: Cynicism. Minutes after the Nobel Committee announced that President Obama had won its annual Peace Prize Award, a phalanx of conservative suits – lead by John Bolton, Ed Rollins, and Bill Kristol – ridiculed the Oslo news. Kristol said that John McCain was a better Nobel candidate, while Bolton resurrected the name of the man who’s considered the Last Real Republican: Ronald Reagan.

“President Reagan called for a world without nuclear weapons,” Bolton told the Washington Post. “Where was his Nobel peace prize?”

If Reagan were alive and well, he would have ridiculed Bolton – and applauded Obama’s latest achievement. Reagan had much in common with Obama. Both were blessed with a gift of gab, both were blessed with a telegenic ability to connect with audiences, and both were blessed with a supreme sense of their political mission. Opposites ideologically, Obama and Reagan are also united by their circuitous route to the White House – Reagan’s via an Illinois childhood, a Hollywood career and California politics; Obama’s via Indonesia, an Ivy League education, and Illinois politics.

Bolton is correct on the facts: Reagan called for a reduction in nuclear weapons, and was so vocal in his belief that the Nuclear Age Peace Foundation labels him “a nuclear abolitionist.” Obama can be tagged with the same “abolitionist” label for his efforts to reduce nuclear stockpiles around the world. Unlike Reagan, Obama has the political cachet to actually implement this reduction. The Nobel award ratchets up that cachet, for which we should be grateful.

Reagan ascended to the presidency on a platform of optimism. The comments by Bolton, Kristol (“if the . . . Norwegians wanted to give the Nobel Peace Prize to an American, it would have been better to give it to Sen. John McCain for having the guts to push through the surge in Iraq) and Rollins (“At the end of the day, what has he accomplished?”) are sour grapes. Rollins worked for Ronald Reagan. He should know better. But less than a year into the presidency of Barack Obama, Republicans are desperate to stave off their sinking fortunes. Their cynicism is a sign of the times, as much as the stunning news that Obama has won the Nobel.

12 Responses to Dear Republicans: Reagan would have applauded Obama’s Nobel